Back in 2015 I first saw the “Jack” lower by Sharps brothers. Back then I thought “I’ve got to build me one of those” and thus my quest began.

I try to wait and buy parts only when on sale, however I do fail at that. In May 2019 I still did not have all the parts I wanted to complete this build so I gave in and ordered the final parts at retail.
During the years following my finding the Jack lower, I purchased it, and scanned the internet for build ideas, looks at parts that would fit what I envisioned my rifle to look like. Ideas came and went. I took screen shots of numerous builds to give me better ideas of what others had done, what I thought looked good and what was good for them but not for me.

June of 2016 I ordered the lower from Lanbo’s Armory.

I decided I wanted a rifle caliber “pistol”, and would semi-permanently attach a suppressor. Now, I could make a Short Barrel Rifle (SBR) and pay the $200 tax stamp and waiting period but I did not want to pay twice, since for the suppressor I needed also had a $200 tax stamp. I could permanently attach the suppressor to the barrel and with its overall length greater than 16”, not worry about the rifle lower and just register it that way. That is not for me at this time, so my decision was for a pistol stock.

In choosing parts I tried to be very conscious on the parts and the reasoning. I chose the Velocity 3# Trigger since it was a sponsor and recommended by Student of the Gun and my friend Paul Markel. I had a nitride bolt carrier group I bought in 2015 because the price was good.

In 2017, I found a “skeletonized” upper that I hope will give the look I am going for, and bought the first red parts. My goal was a bone colored upper, lower and fore end with red accents including the barrel and suppressor.

In December 2017 I found a forward assist, castle nut gas block and some magazines in red.

In 2018 I got tired of waiting for the barrel I wanted, to go on sale and bought a 10.5 inch one that I thought had a mid-length gas tube (I feel that the mid length systems run more reliably than carbine systems, however I have built and own carbine length systems) and with a sale going on purchased the “One shot” upper from Unique ARs.

With all the time I took to order the parts (from 2016 to 2019) one would presume I would take pictures of the parts in a pile, before doing anything with them. Wrong.

June of 2019, I had the upper, lower and forearm painted at SR tactical in Christian County MO. They came out more silver than white and the owner made excuses. I had shown them and offered to leave plenty of photos with them of what I wanted (bone colored), so I know it could be done. They offered to redo it, however I did not want to wait more and have a problem I had with the purple AR I built. 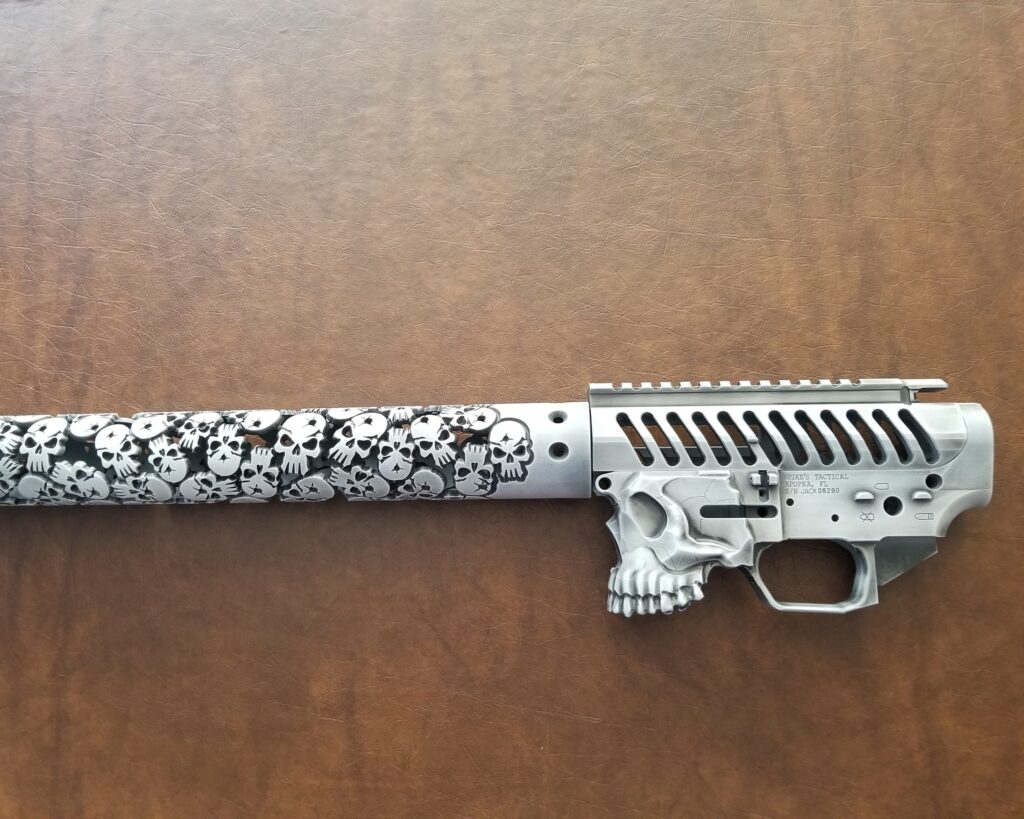 Too much paint starts to fill in the holes in the upper and lower. With this and the purple weapons, I had to use a drill bit in all holes to make room for the takedown pins, safety et al. I knew if they repainted it, it would be worse.

As I started to assemble the lower I ran into color confusion. The castle nut I bought was defiantly a different shade of red than the stock. Thank goodness the stock had its own nut so I used it. This is when I was reminded that sometimes you buy stuff you don’t need, even though you thought you did.

I had bought a JP Silent Capture spring kit for the buffer. It turns out that it would not fit the Gun Tech Minimalist Stock. However once again, the stock came with a buffer and buffer sprint.

I had also bought an Odin Works red extended mag release button, however in May I found a regular mag release in red and order it with several other wrap up parts from TacticalGunParts.net.

I now have blue carbine length had guards, a blue trigger guard and several red accessories that are in my box of AR goodies. Such is life. 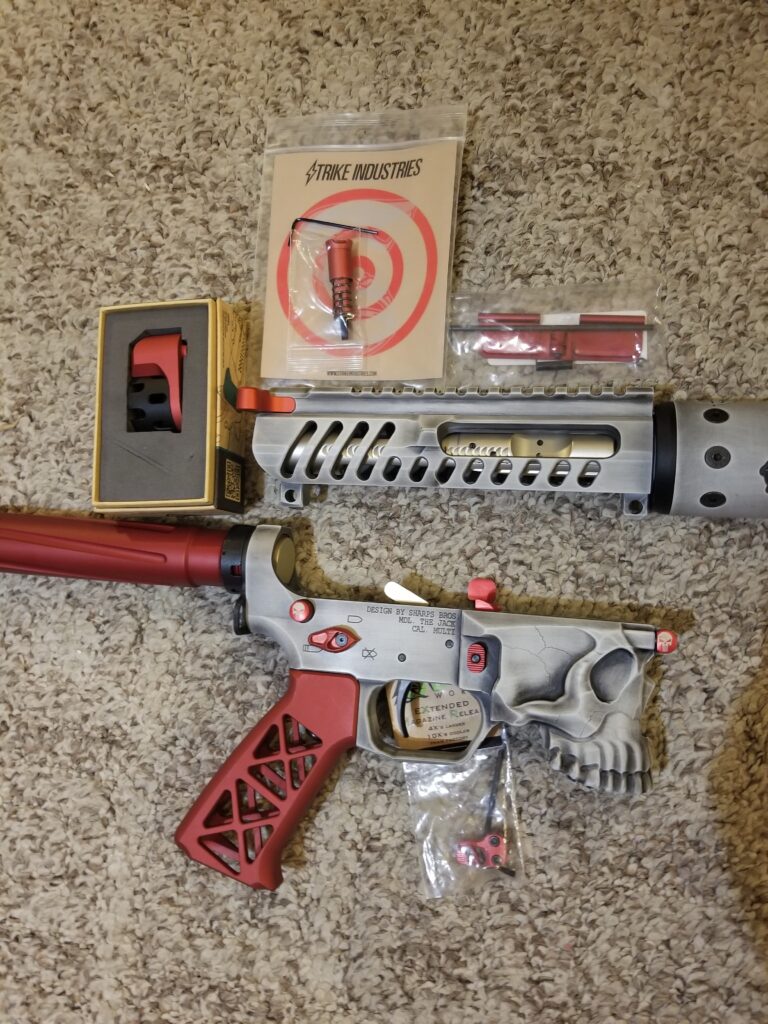 After getting the parts back from being painted I decided to assemble the lower. Other than the expected for-mentioned paint causing pin holes to need cleaning, all went well. There was only the usual springs, springing issues however, this time, none were lost. 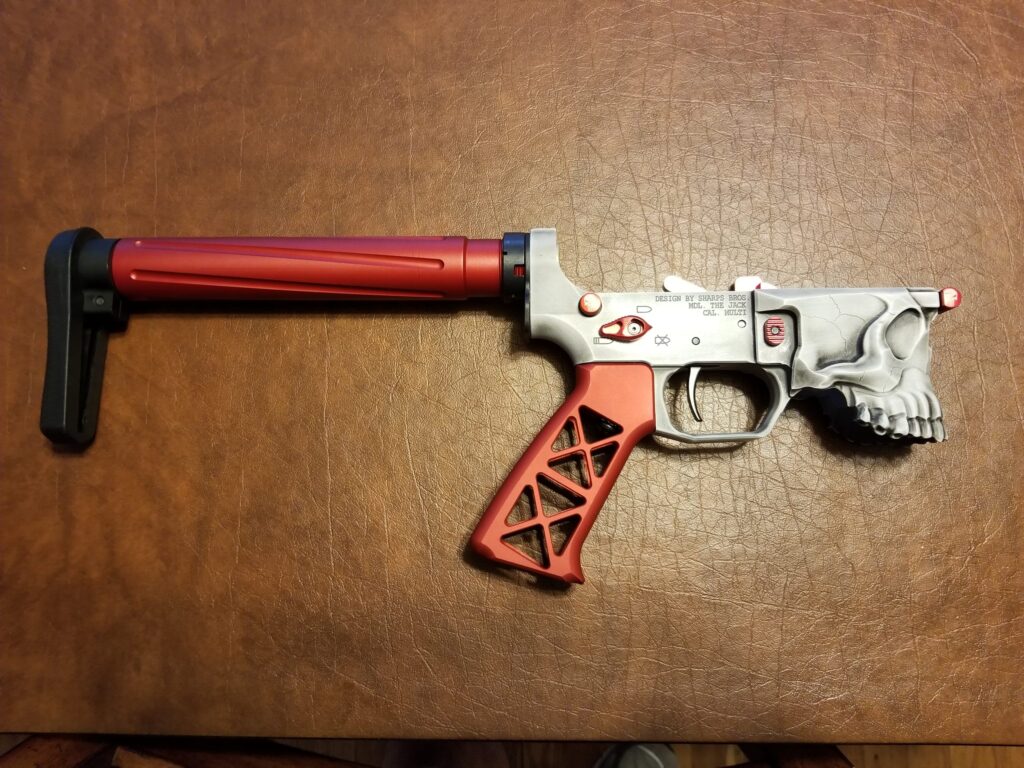 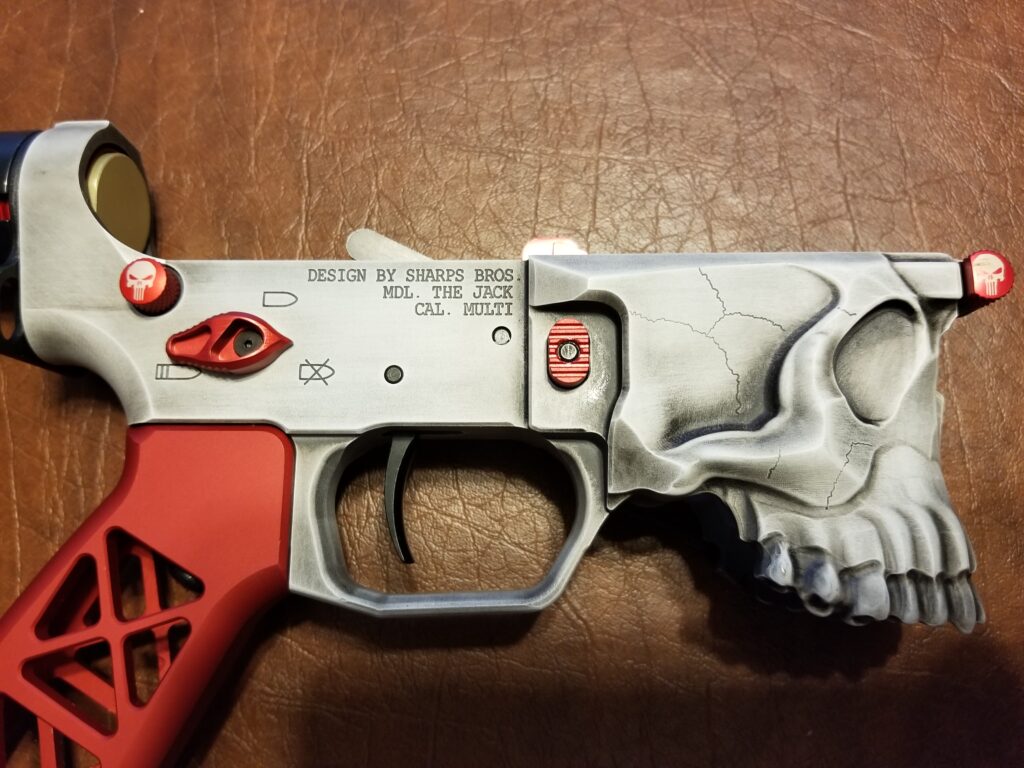 While preparing to assemble part of the upper (I have not had the barrel painted and the suppressor has not “arrived” yet), I came to a screeching halt. The Skeletonized upper requires a special tool, that was not mentioned prior to purchase but with a big red note in the box. It is called a “Reaction Rod” (as all the 12 year old mindsets giggle). 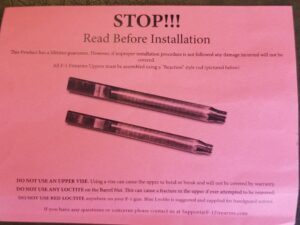 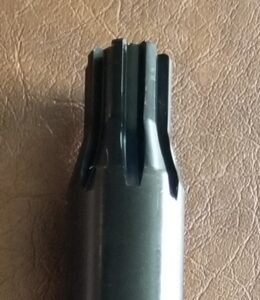 The problem is, this tool could be $94 or $175 with a search on Brownells.com and there is a possibility that it is also a Barrel Extension Torque tool that is only $35. Which one to get? I went with the $94 one.

In January 2020 the suppressor paperwork finally was approved. I put it in the safe and decided that at a slow time I would build the upper and finish the rifle. March and the Chinese Corona virus picked the time for me.

Gathering all my parts I started the upper build, first thing, the barrel I ordered was setup for a carbine length gas system. How in the world did I think it was mid-length? Back to ordering parts.

Once the gas tube was in, I took a few pictures and assembled the upper, without painting the barrel or suppressor, I figured I can break it back down and paint it later.

Attempting to assemble the upper and lower I ran into a problem. They just did not want to fit. I carefully coaxed them together then the bolt would not go forward. The bolt catch was hitting the upper and pushed up just a hair internally hitting the bolt. 15 minutes of careful disassembly later, I was able to be sure the extended bolt hits part of the upper and raises the catch. 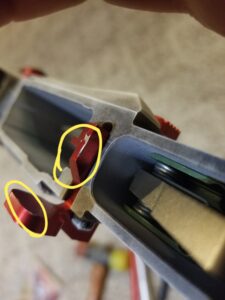 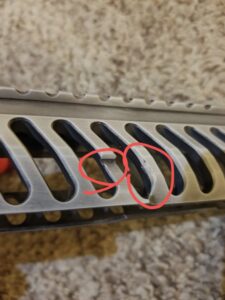 I quick check with a functioning rifle, it is the extended part of the bolt catch, a regular size one works with the upper just fine and the lower works fine on my main AR.

Back to the parts list and a search of Tactical Gun Parts showed all red anodized bolt catches out of stock. A check of Primary Arms and Brownells left me empty. An internet search found several un-trustworthy sites (some hacked, some with parts that had chipped paint) and some with only extended catches.

Emails to TGP let me know they had none in stock and none on the way, according to them, I could just keep checking back. As of March 30th, they have removed all anodized bolt catches from their web site.

Since this happened, I took a better look at the lower and realized the “pistol grip stock” was a rifle stock not a pistol brace. Good thing I didn’t get this assembled, the BATFEMOUSE would have thrown my Constitutional Conservative butt in the slammer.

Now I have to decide if I make this and SBR. Not! So, I can get a different pistol buffer and arm brace or weld / pin the suppressor permanently to the barrel since it is over 16” combined (10.5” barrel, 6.8” Suppressor). If I make it permanent, I will probably swap suppressors with an older, heavier Gemtech. The other option is to just replace the barrel with a 16” plus one. 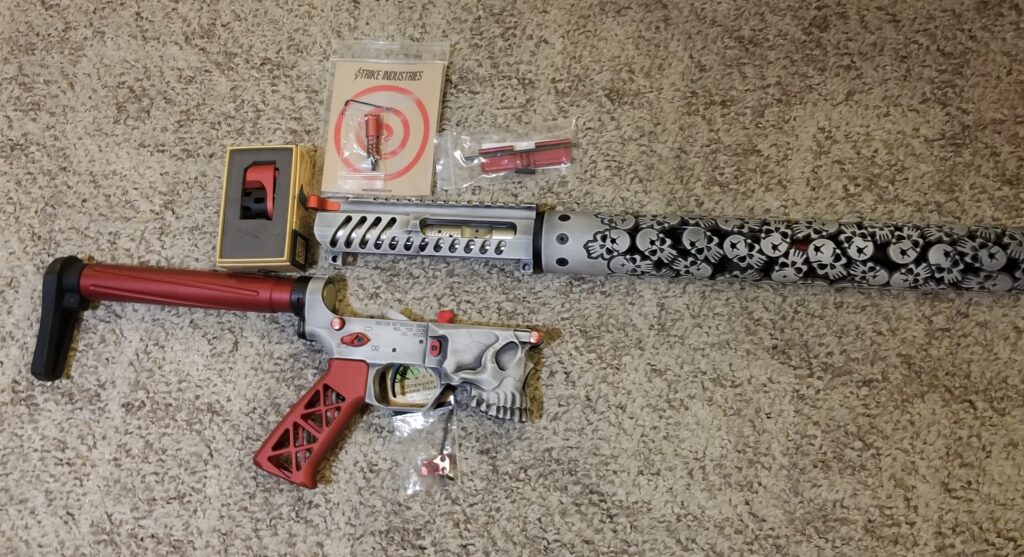 Adding up my cost, without the Reaction Rod for the upper, I’m out over $2,500, and I still have not come up with what type of site and its paint job. The joys of building an AR never end. 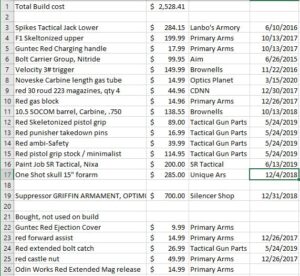 Even though COVID (due to production shortages), Riots (causing good and bad people to stock up on arms) and the presidential election (Every election year guns and ammo and parts get scarce) have caused prices to increase and parts to become difficult to find, I finished this build by making it a rifle instead of the pistol I wanted.

I found a silver skull bolt catch from R1 Tactical and ordered it. I filed some on the lower to make the red magazine work properly. My previous pictures did not show I had to put in a plain black one because the red one stuck.

I purchased a Spikes Tactical 16″ 5.56 mid-length barrel so I could use the ‘pistol grip’ rifle stock.

This allows the barrel to extend past the hand-guard. The only two things I am not sure on are the muzzle device (I may put an A2 brake on it) and if I will get the barrel painted.

Swapping around parts did change my cost of the build. I took off the price of the suppressor, swapped barrel and gas tube costs, added the bolt and magazine release catches.