Recently I wrote an article on converting your AR-15 or AR-10 into a different caliber rifle. After publishing it, I thought I should have published how I came about those ideas originally. 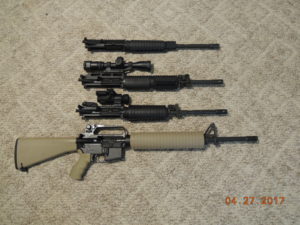 The ability to swap out AR uppers to change calibers or keep the same caliber and just have different barrel and rail system is great. You can have an A2 style with 1:9 twist for the old “military” feel or CMP shooting, an 18” MK II style with 1:8 twist for heaver bullets and an ACOG and light attached for a more current military feel as well as a “predator / varmint” upper with a 22” barrel and 1:10 twist and a nice 4-16 scope for getting rid of small pest out in the prairie. All while using the same lower, bolt, bolt catch, magazines. Heck you could use the same ammo, thought a specific upper is best with a specific round in it.

Back in 1998 or ‘99, I bought my first AR. It was an A2, 20” heavy barrel designed for CMP shooting. In 2002 I bought a M1 Garand and shot it at CMP shoots for a while. About 2003 or ’04, I decided I wanted a different AR rifle. While comparing prices of a complete AR I realized that what I wanted was out of price range. I ended up getting a 16” military barrel A2. It was lighter and of course shorter than my previous one. Now I had two, AR-15’s in 223. A little while later I decided I wanted to go varmint shooting. At the time, both previous AR barrels were 1:9” twist, made for the 55 to 62 grain bullet, primarily. A varmint round was normally a 35 to 45 grain bullet and needed a 1:12 twist rate. A new complete rifle was going to cost well over $1,000, again, beyond what I wanted to spend. So a 22” stainless, bull barrel upper met my needs. Now I had three “different” rifles, all in the same caliber I admit. Each had a different purpose, CMP shooting, varmint shooting and “because I can” shooting.

Which .223 or 5.56 round is right for you? For a specific situation? Well, that is a very in depth discussion that would take a lot of space. Jumping over to Brownells.com you can see some of the long list of available brands, weights and quantities of ammo for your rifle: http://www.brownells.com/ammunition/rifle-ammo/index.htm?avs%7cCartridge_1=AJJ_223%2bRemington%7cAKK_5xzzx56%2bmm%2bNATO

I use the 55 grain (that is a weight), full metal jacket (FMJ) and the 62 grain green tip for practice ammo. Don’t shoot the 62 grain at steel targets. Many have a steel core under the copper jacket and will punches holes or really dent up a steel target. I really don’t care the brand of if they have brass or steel case. This is just ammo for training classes that shoot 200 yards or less and practice / plinking at those distances.

I take many different types of ammunition and see which ones shoot best in a particular upper / rifle. I normally document the top three, then I keep that ammo set aside for that upper / weapon in case accuracy is needed. To give you an example, in the pink AR build article, the “Right to Bear Ultra Match” 75 gr is the most accurate round, however if I was wanting to shoot at rodents in a field, the Hornady Varmint 55 Vmax was almost as accurate, and is designed for varmints. In my trunk gun the most accurate round is the Gorilla 55gr Blitzking, a round designed for small critters, I would not use that on 2 legged felons, the Gorilla 69 grain Sierra Match shot almost as accurately but will stay together better and in theory do more damage on the bad guy.

My method of spending time and effort on the top rounds for a rifle is not necessary. A good friend of mine and a SWAT Sniper simply shoots 55 grain for plinking in all his 5.56 / 223 and uses Hornady 75 grain TAP as his precision round. That way he only has 2 rounds to keep track of, and he keeps his log books with each rifle, to know each individual rifles accuracy with either round. No need for 14 different stashes of ammo!