Jewell was a security guard at Olympic Park in 1996 when he spotted what he thought could be a satchel bomb under a park bench. 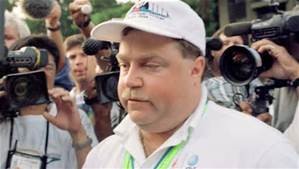 Jewell cleared hundreds of people from the square, saving their lives, but when the bomb went off, a woman was killed and several others injured.

Not long afterward, Tom Brokaw, ace news reader for NBC, announced on national television that even though the FBI didn’t have any evidence, his confidential source said they knew who the bomber was—- and it was Richard Jewell.

And Who Doesn’t Trust Tom Brokaw?

Brokaw was not a man to be taken lightly. He had ascended to the plum NBC Nightly News anchor job after several years of hosting the Today Show, where he was renowned for his award-winning and hard-hitting coverage of daring recipes and personal grooming.

So the carnage began.  Richard Jewell, a quiet little guy who saved hundreds of lives and lived at home with his mother, was hounded day and night, his house surrounded and besieged by news vans chock-full of news jerks.

Ceaselessly mocked by late night television comedians as the Una-Doofus (a play on the UnaBomber) his life was wrecked.

The FBI changed its mind. And after they caught the real bomber, they especially changed their minds.

The real guy, a survivalist, was arrested while going through the dumpster of a Save-a-Lot store. Turns out after five years in the woods, he had a craving for pizza.

And then the happy ending—the richly deserved lawsuits…

Jewell sued NBC, CNN, and the NY Post for defamation.  These guys smartly settled out of court with big payments, lest their incredible incompetence and stupidity be further aired in public.

Of course, all of this happened 20 years ago and the players have moved on.  Sadly, Richard Jewell died a while back because of life-long health issues.

And NBC, after beclowning itself with Tom Brokaw’s idea of good journalism, has since done a far better job of screening the journalistic credentials of its Nightly News anchors.