In part 1 I gave you some of my adventure of getting to the Student of the Gun University from Missouri and my meeting my classmates.

In part 2, I am going to pickup from where I left off.

Day 1 training was the “Force Options: More than just a gun” class. Jarrad was in the back of the room and soon Professor Paul came in. After introductions and a quick overview of our backgrounds, from each of us students, we began the training.

We went over the various forms of “pepper” spray, Tasers as well as go-no go situations. We used demonstration spray for scenarios and Zack got Tased.

What? Oh you want more? Paul shot the Taser into a punching bag for demonstration. Sparky fun! Then Professor Paul taped the leads on Zack, then Zack fell down. If you want more, sign up for the class. Now before you go for the parental abuse thing, Zack was a willing subject. 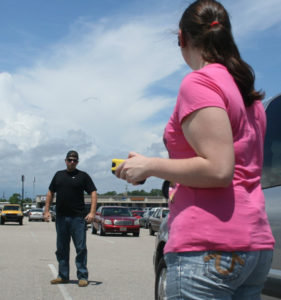 We, as a group, went to “the Love Shack” for lunch, I recommend it if you are in Gulf Port or Biloxi. I got the Shrimp Po-boy.

After lunch, more lecture and lots more hands on. For a one day alternate force class this was well worth the time. Information was passed from Professor to student, things like, “you would have never heard of Travon Martin or George Zimmerman, if Zimmerman had” a backup device, a less lethal option, and used it before he got jumped. Also we were given some wisdom on types of OC/Pepper spray to get and why. Streams vs. cone / sprays vs. foam. One ingredient (like true pepper spray or only “Mace”) compared to mixed sprays (pepper / mace / UV).

We also learned about alternative weapons that the sheep don’t know are weapons. If you want more information about what we learned, go to http://www.studentofthegungear.com/collections/live-training-events and sign up for a class.

Friday evening Jarrad invited me to meet him and a few others at a Jazz bar in Gulf Port, since I like both kinds of music, Country and Western, I was not too sure, but you know the saying, when in Mississippi… (I got to spell it again). I had a good time and got to meet Jarrad’s roommate, and a couple of friends. Though I do admit, being in a strange city inside an all glass building is a little nerve racking for the security minded. Thank you Jarrad, I did enjoy it.

Saturday was day one of Beyond the Band Aid, think of it as trauma first aid. After another breakfast at the hotel, I headed off to class. I arrived 15 min early, sat in the car and read Psalms and Proverbs for the day. Paul and Jarrad arrived while I was reading. Apparently Zach was already there as I heard Paul say something to him as he entered the building. My classmates arrived right at 9 am. 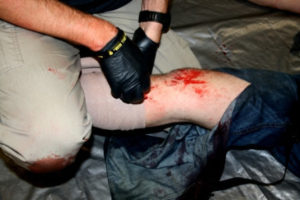 I regret (though this is not one of my big regrets) I did not tell Paul that I never tried the door, since there were no vehicles there I just sat in my rental and read. I don’t think he was punitive to Zach, I just should have made sure that Zach and Paul knew that I did not try the door.

For more on the Beyond the Band training as well as my regrets from training at Student of the Gun University click here.

Until we meet again, keep your booger hooker off the bang switch!

One thought on “Training at Student of the Gun – Part 2”